Are You Afraid of Lions?

We bring you the following article to give you more of an understanding about the practice of Scientology outside of the only officially recognized organization in which this religion may be practiced - The Church of Scientology.

Religious freedom is claimed by many, but is the practice of that belief a reality?

I am afraid of lions. 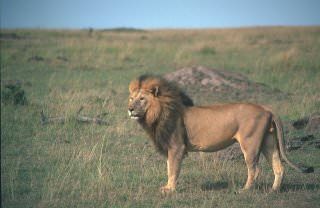 Practicing Scientology outside the Church of Scientology, is not what you may think it is.

We would all like to believe that we are free to practice our religious beliefs whenever and where ever we choose. Is this a right that cannot be denied? Are we assured the right to our own religious beliefs and practices? Current copyright laws say otherwise.

As a religion, Scientology deals with the spiritual world in a very methodical and well laid out manner. Many of the answers of life and living are supposed to be resolved in this “bridge to freedom”. I may not totally agree with all the tenants of this religion, but I do agree that many of the answers of life and living can be resolved using the basic technology of this religion’s practices. But what of the freedom to practice this religion outside of any “officially” recognized organization?

The Church of Scientology (CoS) believes that it must restrict the use of it’s technology so that it does not become altered in any way. Part of the beliefs of this church is that a rigid control must be exerted upon it’s membership to ensure the correct and “standard” application of it’s technology. It fears that the incorrect use of it’s technology will create more harm than good, that it would be destructive and potentially fatal.

That is all very well and good. I can admire an organization that seeks to limit the use of certain religious methodology to protect, not only it’s membership, but that of the general public as well. But what about the freedom to practice a religious belief as one sees fit?

Based upon this concept, the CoS must assume that ALL spiritual beings are exactly the same and that they require the exact same methodology of spiritual teaching without deviation. Is this a definition of spiritual freedom for a spiritual being? Or does this belong in the domain of robotism, applying the same concept unerringly, over and over?

To fulfill the mission of “standardization”, the CoS has copyrighted the teachings and methodologies of L. Ron Hubbard. Doing so, this organization can be assured that the application of their religion can be controlled to a great extent. But why does a religion, per definition, require controlled access to information that promotes spiritual freedom? One of the main tenants of this religion is “What is true for you, is true for you.” How can the idea of individual truth co-exist with a standardized approach to spiritual freedom. Does this not become “What is true for you, is true for you. But you must do what we say anyway.”.

Truth, whether it is commonly accepted or restricted to a label of “confidential”, is still truth.

How can truth be potentially fatal as is claimed with the secret “upper levels” within the CoS? “The truth shall set you free.” is not applicable within this organization. Quite the opposite is claimed in this manner. Which brings us to the point of practicing this religion outside of officially sanctioned organizations.

You now know why this religion is restricted. You know that this is a copyrighted religion, it’s use limited to the whims of it’s legal holders. Practicing this religion, or any part thereof, outside the church is not looked upon with favor. The favor one receives is the title of “SP”, Suppressive Person - one who suppresses the correct methodology and use of “standard” Scientology practices and beliefs. SPs are targeted by the CoS for elimination.

One can only practice the religion of Scientology in the exact way that is laid out by the CoS and only within an officially recognized arm of the CoS. Those that do otherwise, when not labeled an “SP”, are politely referred to as apostates - a person who has forsaken their religion, which is a misrepresentation of denying religious rights to those that seek it on their own terms.

Practicing Scientology outside of the CoS is a dangerous and risky affair. One cannot openly practice or teach the spiritual concepts of Scientology without being concerned about repercussions.

The complete legal ownership of this religion entitles the Religious Technology Center, the legal arm of the Church of Scientology, to do as it pleases.

Are you afraid of lions? Lions symbolize the appetite of those that do not believe in religious freedom, but only desire to be satiated with the bodies and souls of those who oppose it. I fear to become a meal in the crusade called the Church of Scientology.

Previous  Gimme Some Cake!
Next  Welcome To The Free Zone - Is It Fate?
Robots only! DO NOT follow this link or your IP will be banned.