Ring, Ring. Are You There?

I’ve got an answering machine that works marvelously for screening the numerous desperate calls for attention that are made by various parties and such. 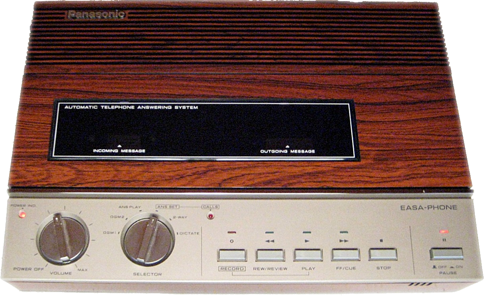 I’d say that about 95% of the calls don’t even bother to leave a message because they already understand that leaving footprints is about as useful as growing a third eye. My opinion is that that would not be a bad thing at all as maybe, just maybe their sight would improve enough for them to cognite that their importance is fruitful only to their own imaginary delights. That’s a nice way of saying that some ‘get it’ and some could care less because when it comes to their Master’s wishes they must abide - no matter what.

Among the usual callers there is one that really stands out and has the highest rating in pest control circles. You’ve probably heard of them. They go by the name of the Church of Scientology. These suckers call night and day mostly leaving no message at all.

To give you an idea of the scope of their derangement, I’ve been receiving calls from them for overs 30 years. Did you get that? Over 30 years! I have to laugh at that because it’s such a waste of time on their part but they can’t fathom that because of their own lust for influence.

I also receive quite a bit of propaganda from them on a regular basis. Last year was the year of ‘personal’ letters from a staff member out in the great ‘friendly’ state of California. If you know anything at all about their writing style you know that it’s like a computer generated letter referencing god knows what with the context having nothing to do with anything at all - other than those famous ‘statistics’ of course.

Over the many, many years I’ve used various tactics for effect in response to their attention. It’s really interesting to gather information about them through those tactics. I actually enjoy this aspect of our ‘special’ relationship.

The latest tactic I’ve been using is sending them packages of Salvation Army used books along with any accumulated propaganda. Remember all those ‘personal’ letters from last year? Well, when they would send them they would include a postage paid return envelope. I saved all of them and have accumulated quite the stash. I would also save a few boxes from the UPS dude who can’t seem to remember that the house across the street is not my house, nor is the one down the street, but that’s another story.

Gathering up my box I would pack all their latest propaganda in it (properly manipulated so that they can’t reuse it) along with any junk mail accumulated along the way. Since the Salvation Army doesn’t do the big-shot big-bucks fancy dance I would go there and find some nice big heavy books. They’ve got to be priced under a dollar and I’m never disappointed. So I would take those books and chuck them into the box. Then to top it all off I would write a little note saying whatever I felt like at the time and leave off with things like “Have a great LRH day!”. You know the routine.

Lastly, I’d take one of the many postage paid return envelopes that I have saved and tape that sucker on the box. A little more taping and off it goes to someone in the land of Ozzie and Harriet.

If you do try this method of ‘communication’ with your friends at Control Central don’t forget to include some of the weekly flyer coupons that get stuffed into your mailbox. The busy bees at the factory could always use some money saving fast food coupons. I do pity the trough eaters but we all make our choices.

One time I included a free tape measure from Harbor Freight because I ran out of weighted items. Be creative, be free to include whatever you wish because they are not gonna send it back to you. After having to pay the postage to get your crap, mums the word.

I have noticed a slight decrease in the sheer volume of propaganda that I receive. I must be doing something right. There was even a message left on the answering machine requesting that I call some idiot in the mail room so that he could update his records. That made my day.

Their waste of innocent trees and radical electrons tends to be cyclical like an amusement park roller coaster ride so we’ll have to see how it plays out long range. Sometimes the brainwashing gets soft and then when it gets refreshed it’s back to square one. I’ve seen it happen many times so we’ll see.

I don’t want to give the impression that all of my answering machine’s tireless work is devoted to Mr. FancyPant’s boys club but they do win the prize for longevity. Over 30 years worth.

You might have realized by this point that I never pick up the phone. That would be true especially if you are not familiar with the proper communication acquisition technique. Hello?

Before I forget I also want to make mention that among the numerous tactics I’ve used actual contact with them is absolutely the worst option to take. These monkeys could care less about anything other than their own vanity and will boldly lie where no one has gone before. I still laugh about them calling my brother, pretending to be a brother, wanting to find my whereabouts. What idiots.

There’s lots more to this story but right now I’ve got something else to do. Picking my nose comes to mind and then maybe wiping my ass with another copy of some shit in the mail. Gross, but appropriate.

I’ll leave you all with a happy ending:

Previous  Shhhh.... All is Quiet
Next  The Way of the Warrior
Robots only! DO NOT follow this link or your IP will be banned.