Have you ever tracked the source of thoughts, of their beginnings and of how they come to be displayed upon the screen of the mind? Imagination is quite similar to that process but that’s not the point that I am making here.

Imagination requires that there already be an existing reality from which to draw it’s sensory connection. That means that whatever you or anyone else can imagine has already existed in time. It’s impossible to conjure up something that does not exist, therefore a basis in reality becomes quite apparent.

This is a two-step process that I am describing here because the other leg that the process and procedures of imagination rests upon is that very subjective and personal thing called ‘time’. If you believe that time, for you, is but in relation to your personal ‘human birth’ then that is the decision you and you alone make. By restricting yourself you might as well go and sit on the sidelines and twiddle your thumbs as you wait for the ‘all clear’ signal from the boss.

You can do that now if you wish. Maybe you already are, but that’s not my call.

Anyway, without limitation the imagination reaches into the vast depths of your own past experience. Shocking as it may be, you can try and filter out everything you can in order to keep a semblance of an accepted sanity but sometimes the imagination gets carried away, doesn’t it? It sometimes presents things upon the mind’s eye completely at odds with your own ‘reality’.

How about a very simple example? Imagine the Eiffel Tower. It’s quite the famous landmark so just about everyone and their mother knows what it looks like. You don’t have to physically go there to know what it looks like because all those lovely pictures have already been experienced and dutifully filed away for later reference. Eiffel Tower? Check.

Now what would it be like if you had never, in all your born days, ever seen a picture of that tower. What if you had never heard the name nor seen it’s shape and one day someone comes along it say “Eiffel Tower!”. The result would be a complete blank in your mind and further, you would question the sanity of the one doing the uttering. There would be no recorded data from which to draw a perception of so-called ‘knowledge’. Nothing, blank, nada. 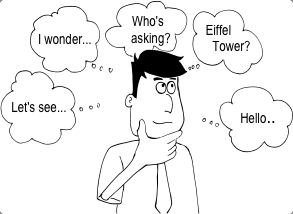 Maybe this is a good time to ask yourself the next time your imagination ‘plays tricks on you’, where did that come from?

Do you really think that an ‘inspiration’ comes from no where? That any and all basis from which writings, movies and what not come from are just… *shrugs shoulders*.

Ignorance is bliss. I don’t believe that but whatever works…

Pulling The Rabbit Out Of The Hat

One can believe just about anything like, for example, that the origin of what is written above comes from the person themselves. Uh-huh. Simple explanations in complete disregard to personal experience makes it all… well, like a magic act.

It’s like saying that the rabbit comes out of the hat.

Never mind that the empty hat was explicitly shown to you just a moment before. As the where the rabbit came from…. *shrugs shoulders*.

Dunno, don’t care. It just comes from the person themselves.

Uh-huh. Lacking personal experience the clueless walk the Earth in search of the American Dream. Don’t worry though, zombies are everywhere so good company can be found just about around any corner.

Previous  Criss-Crossing the Night Away...
Next  Strange Magic
Robots only! DO NOT follow this link or your IP will be banned.