A moment of pause, an evening of remembrance and a fist full of dollars. I know, it’s a crazy, crazy world isn’t it? With all the wagons circling, the trains running late and the runways blocked where oh where can he be? Living in a well of despair doesn’t mean that nothing is happening, that all is lost, neglected and of course everyone’s favorite, destitute. There has always been a unifying voice and yet perhaps, just perhaps it is now coming to the fore to make and stake it’s claim upon the world at large. Even though I’ve been quite busy dozing so as to allow time to pass doesn’t mean that time has any meaning for me whatsoever, it doesn’t. But despite that fact, appearances are so… charming are they not?

Look! It’s old Grandpa sitting on the porch with that damn lazy dog. “If you can’t run with the big dogs stay on the porch.” Uh-huh.” comes the reply with that annoying background noise of the rocker squeaking every which way to Sunday. If only chairs could talk there would be a different buzzing in the forest, among the trees. There is always the conundrum of one thing leading to another with the ensuing problematic thinking of it all leading down a rabbit hole to god knows where. Coming up for air is not an option no matter the weighty amount of supposedly life-giving tanks of hot air. But don’t worry, this isn’t leading anywhere anyway. 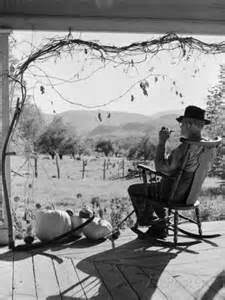 Sometimes I just like to ramble in a concatenated sort of way employing the age old trick of correlation seemingly beyond the bounds of civility. Does one thing really lead to another? Can a thought perpetuate as ripples on a pond, expanding and interacting in such a way as to eventually wind up upon a far-off beach with the ‘experiencer’ completely devoid of knowledge, scope and breath of it’s existence? It’s a known fact that a work horse performs best when blinders are appropriately applied.

This isn’t to say that anything or everything is amiss because like dominoes and toy wooden solders, all must be optimally positioned so as to provide maximum enjoyment.

I just so happen to not play the wait game, says the Old Man on the porch.

Grace From Heaven  (Prev)
(Next)  In The Day of Reckoning
Robots only! DO NOT follow this link or your IP will be banned.